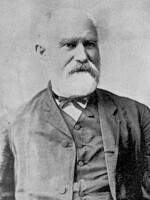 Premise Historical biogeography of ferns is typically expected to be dominated by long-distance dispersal, due to their minuscule spores. However, few studies have inferred the historical biogeography of a large and widely distributed group of ferns to test this hypothesis. Our aims are to determine the extent to which long-distance dispersal vs. vicariance have shaped the history of the fern family Blechnaceae, to explore ecological correlates of dispersal and diversification, and to determine whether these patterns differ between the northern and southern hemispheres. Methods We used sequence data for three chloroplast loci to infer a time-calibrated phylogeny for 154 out of 265 species of Blechnaceae, including representatives of all genera in the family. This tree was used to conduct ancestral range reconstruction and stochastic character mapping, estimate diversification rates, and identify ecological correlates of diversification. Key results Blechnaceae originated in Eurasia and began diversifying in the late Cretaceous. A lineage comprising most extant diversity diversified principally in the austral Pacific region around the Paleocene-Eocene Thermal Maximum. Land connections that existed near the poles during periods of warm climates likely facilitated migration of several lineages, with subsequent climate-mediated vicariance shaping current distributions. Long-distance dispersal is frequent and asymmetrical, with New Zealand/Pacific Islands, Australia, and tropical America being major source areas. Conclusions Ancient vicariance and extensive long-distance dispersal have shaped the history of Blechnaceae in both the northern and southern hemispheres. The exceptional diversity in austral regions appears to reflect rapid speciation in these areas; mechanisms underlying this evolutionary success remain uncertain.

The genus Woodwardia, which together with the genera Anchistea and Lorinseria comprise the subfamily Woodwardioideae of Blechnaceae, has a disjunct distribution across Central and North America, Europe and the temperate to tropical areas of Asia. Fossil records of Woodwardia occur throughout the Pal…

Ferns and lycophytes are an excellent group for conservation and species distribution studies because they are closely related to environmental changes. In this study, we analyzed collection gaps, sampling biases, richness distribution, and the species conservation effectiveness of protected areas i…